Residents of Drewery House Supported Home in Wigmore proved that a small box can have a big impact, when they joined a local church project to make Christmas boxes for children around the world.

Keen to make a difference to the less fortunate this Christmas, residents of the Drewery Drive supported home joined the Samaritan’s Purse: Operation Christmas Child campaign, filling several shoeboxes with toys and other things they may need, as Christmas gifts for children in third world countries.

Since 1990, more than 168 million children in over 160 countries have received shoebox gifts and after the church collected their boxes, the residents watched a video of children opening boxes in the past. The video brought many of the residents to tears, overwhelmed with the impact their simple shoeboxes would have and the joy they would bring.

Helen Goulding, Housing Officer at Drewery House said: “Led by one of the residents, everyone was very keen to get involved with Operation Christmas Child, as it’s a small and simple thing, which we can all do, that makes a big difference.

“The people who came from the church to collect the gifts were delighted with how many shoe boxes the residents put together, and they were overjoyed that their contribution would make such a difference to the lives of children who would otherwise, not receive a gift this Christmas.” 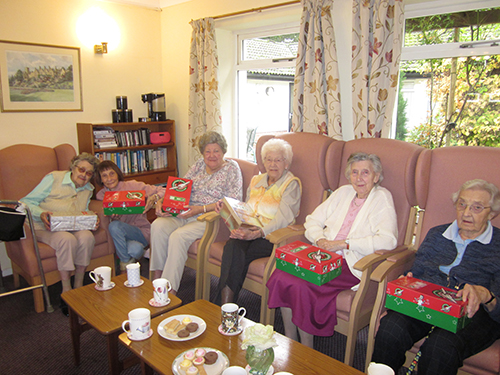